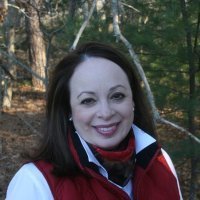 Theresa J. Mitchell is an author based in eastern Massachusetts focusing on historical non-fiction. Her new book, Symphony in the Wilderness, examines the history and ecology of the iconic Common Loon (Gavia immer) and is expected in Fall 2021 from Cornell University Press.

Until recently, for years Theresa worked in the non-profit sector at Cape Cod-based organizations with missions to preserve open space, wildlife and marine environments. Her most recent post was as Executive Director of Orenda Wildlife Land Trust which owned or managed over 400 acres of open space for wildlife across 25 sanctuaries in Massachusetts. She also holds certificates in Supervisory Development and Executive Integral Leadership from the Mendoza College of Business at the University of Notre Dame.

Theresa is an award-winning journalist and author of eight books. She has specialized in the 19th century merchant marine when Cape Cod sea captains dominated global maritime commerce, Theresa has also explored broader research and writing interests in environmental history and ways in which societies conserve and protect land, water, and wildlife. She is also a noted lecturer before listening audiences in civic, military and academic circles throughout New England.

Writing as Theresa Mitchell, her works include: True Accounts of Yankee Ingenuity & Grit; The Cape Cod Murder of 1899; Cape Cod Bay, A History of Salt & Sea; A Maritime History of Nantucket Sound; Cape Cod Wildlife: A History of Untamed Forests, Seas and Shores, Hidden History of Cape Cod; and The Pendleton Disaster Off Cape Cod, the Greatest Small Boat Rescue in Coast Guard History (The History Press, 3rd edition.) Her books are available on Barnes & Noble, and Amazon.

Theresa is the Founding Director of the 23nd Annual Cape Cod Maritime History Symposium scheduled for November 7, 2020, in partnership with the Cape Cod Museum of Natural History.

Theresa is a member of the American Society of Journalists and Authors, and the Organization of American Historians. A proud native Midwesterner, Theresa descends from the pioneers who settled the Indiana Territory in the early 1800’s, and she returns home often.